The Bitcoin has enjoyed a lot of attention and support just by looking at the difficulty in generating a Bitcoin.   From the chart given by Bitcoin Difficulty SIPA, it can be seen that since Jan 11, it has increased from near zero at the start to more than a million in terms of difficulty.

Previously normal CPU was used in the mining when there are idle CPU cycles and Bitcoin miners do not use specialized mining equipment.   But as the difficulty increases more and more, it was found that it was impossible to just use CPU for mining.   But it was found that GPU such as Radeon 6990 etc was extremely efficient in the solving of Bitcoin algorithms and hence mining.   Therefore specialized Bitcoin mining rigs full of GPUs are setup for mining purposes.   Such GPUs generate a lot of heat and use up a lot of power, therefore one has to calculate the cost of power versus that of the cost of a Bitcoin.   Basically you do not find anyone using CPU mining nowadays for Bitcoin.

When I first started, I do not have any knowledge on GPU etc, I used an online CPU Bitcoin generator. 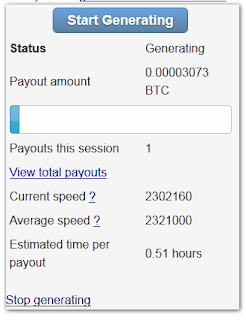 It takes a very long time just to generate 0.00003073 Bitcoin using my CPU in 0.51 hours and mine was a six core new computer!   It was running at 2 mhashes per second.  But a cheap low end Radeon 5760 can easily generate 200+ mhashes per second, therefore why everyone switch to GPU mining.