As we all know Bitcoin is a revolutionary currency that has gain increasing acceptance in more in the tech fields and within the geeks communities.   It was hard work having businesses all over the world, especially Brick and Mortar Businesses to recognize Bitcoin.   Bitcoin has come a long way.   Initially it was only mined by those with extra CPU power.   This has evolved into GPU Bitcoin Mining Rigs, with owners willing to spend tens of thousands of dollars to build the rigs and also thousands of dollars to run the rigs as well as to cool them down.   With the development of FPGA we can see more and more Bitcoin Mining rigs that are specially built for Bitcoin Mining.  The cost of such specialized hardware is definitely more than GPU, though operations will be cheaper as less electricity is needed.  The trend shows that adopters strongly believe that the Bitcoin is here to stay. 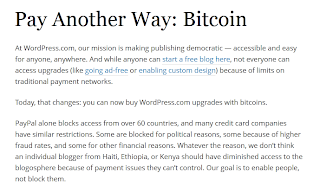 One extremely encouraging development is that of Wordpress.com accepting Bitcoins for upgrading of the blog purposes.   The fact that Wordpress.com, one of the largest blog sites as well as the developer of Wordpress decides to accept Bitcoin is really a great stimulus to the Bitcoin Community.   At present we are seeing tremendous interest in Bitcoins with mining network of 22.183 Thash/s.   Bitcoin has been developing from strength to strength, it is hoped that in the not too long future, Brick and Mortar shops can accept Bitcoin as they had done with credit cards.   I guess the day won't be too far off.